Charles Kawalsky was a US Air Force Major. He was part of the First Abydos mission with Colonel Jack O'Neill in 1995. He was the SG-2 leader when SG teams were created. He died in 1997 soon after a Goa'uld symbiote took him as host.

In 1982, Kawalsky, who was Captain, was part of a squad (as well as Jack O'Neill) who went in East Germany to extract a Russian spy. This mission was a mess and Colonel John Michaels, the team leader, died in the process, killed by snipers (SG1: "The Gamekeeper"). 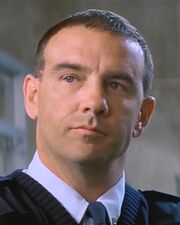 When Doctor Daniel Jackson has finished his symposium on Ancien Egypt, Kawalsky invites him to get inside a US Air Force sedan and meet Catherine Langford. Just after receiving travel tickets, Kawalsky opens the car's door.

In the US Air Force military installation located in Colorado Springs, Kawalsky welcomes Jackson and brings him to sub-level 28 where is located the Giza cartouche. He later receives orders from Colonel Jack O'Neill who's taking command of the Project Giza.

Two weeks later, Kawalsky guides Jackson to a briefing room where the latter reveals the seventh missing Stargate symbol. After receiving orders, Kawalsky turns a command to show the Stargate device to Jackson.

Once Jackson has found the way to get on the destination on the other side of the Stargate, Colonel O'Neill leads a recon team with Kawalsky as Second-in-command. When Jackson tells the team he needs to find a similar cartouche with the gate symbols in order to get back to Earth, Kawalsky gets angry against Jackson. O'Neill orders Kawalski to build a base camp.

When Jackson is dragged by an unknown domestic animal, O'Neill, Kawalsky and Brown pursue him. As they retrieve Jackson unconscious, they then discover an indigenous population working in an open mine. They meet the people and follow them to their big fortified city. Inside the city, as they discover the Eye of Ra bronze, the locals rush suddenly to the city gate to close it. Kawalsky and Brown panic and take hostages. When they realise that the locals only want to protect them from a sandstorm, Kawalsky deeply apologizes to Kasuf, the locals' leader.[1]

During the night, Kawalsky, O'Neill, Brown and Jackson are invited in a banquet. Kawalsky advises Jackson not to eat meat. Jackson replies it may be an insult to them. When a platter is brought with a cooked armour-skinned creature, Kawalsky laughs. Kasuf gestures Daniel to pick up a piece of meat. Kawalsky reminds to Jackson that he doesn't want to offend them. Meanwhile, in the Abydos pyramid, Ferretti tries to radio Kawalsky and Brown on radio but is unsuccessfull. Later in the night, Kawalsky and Brown are surprised by O'Neill's reaction when Skaara, a young Abydonian, is touching a gun layed on a bed.

In the night, all including Kawalsky are looking for Jackson who has disappeared. They finaly find him in a cave where Jackson explains all the Abydonian story with Ra. Kawalsky find a cartouche where is written the Stargate address to come back home. Unfortunately, the last symbol is missing. When O'Neill hears this, he orders everyone to pack up and go back to the pyramid. In the pyramid, O'Neill sees Kawalsky knocked out by an eagle head-covered soldier. Later, O'Neill is thrown in a cell filled with water where he retrieves Kawalsky, Ferretti and Freeman. Kawalsky asks where is Jackson. O'Neill just looks at Kawalski in fear and shock.

The next day, O'Neill, Ferretti, Kawalsky and Freeman are on their knees, on the verge to be executed by Daniel Jackson, execution ordered by Ra to serve as example. Jackson pretends then suddenly folds back his staff weapon on Ra and shoots. During the ensuing firefight, Kawalsky is horrified to see Freeman being deadly shot. But Jackson urges him to flee. Later in a cave, Kawalsky gives praises to the improvised kids' army. But, much to Kawalsky's confusion, O'Neill asks him to take back all the weapons and send the kids home. Kawalsky replies that they have no home now. He learns from Jackson that O'Neill brought a nuclear bomb. Later, when Skaara draw a sketch on a wall, Kawalsky is the first to learn that Jackson has finally found the seventh symbol.

The next day, Kawalski, Skaara, Ferretti, Nabeh, and others young Abydonians are waiting outside when O'Neill, Jackson and Sha're get inside the pyramid with offerings for Ra. When a firefight ensues inside the pyramid, Kawalsky and the small troop try to reach the pyramid's entrance, with no success. When Death gliders come out, all take cover but Nabeh. Finaly, out of amunition, Kawalsky surrenders, reluctanctly followed by the survivors. But they are finaly freed by the rest of the Abydonian population, led by Kasuf. Finaly, when the team is ready to go back home through the Stargate, Kawalsky thanks Jackson and shakes his hand.

Majors Kawalsky and Ferretti are interrogated by General Hammond's office members regarding the First Abydos mission after an alien who looks like Ra came through the Stargate, killed four airmen and kidnapped another one. Later, in the SGC holding room, Kawalsky meets Colonel Jack O'Neill and reveals that him and Ferretti didn't tell anything because of the "kids".

He is part of the team led once again by Colonel O'Neill and goes on Abydos. He gives a small packet of tissues to Doctor Daniel Jackson. Later, when the sand storm as passed, he, Colonel O'Neill, Captain Samantha Carter and Jackson, and some Abydonians go outside the pyramide and come into a huge chamber where they discover that the Abydos Stargate is not the only destination but there is a full Stargate network. When they come back to the pyramid, they find a mess as Apophis came here a few moments ago. He comes back on Earth with the rest of the team and Jackson.

Later, when General Hammond announces the creation of the SG teams, Kawalsky is surprised when he learns he will lead SG-2, on Colonel O'Neill' request. SG-2 will accompany SG-1 on Chulak (nicknamed "Planet Kawalsky" by himself), thanks to a wounded Ferretti who had enough strength to give all the gate symbols to get there. On Chulak, as SG-1 are ready to do recon, SG-2 build a base camp and a defense perimeter (with the help of Captain Carter), waiting for SG-1's return.

The next day, SG-1, along with Teal'c, Apophis' First Prime, and many prisoners, rush to the Stargate area, pursued by a Death glider and Jaffas. He and Warren are able to shoot down the craft with a portable missile launcher. SG-2 defends the area against Jaffas, allowing everybody to come back on Earth through the Stargate. When he's helping Casey, a SG-2 member who has been shot by a staff weapon blast, an infant Goa'uld gets out a dead Jaffa body and comes into Kawalsky by his neck, without his knowledge. After coming back on Earth, he's suffering on his neck, and soon after, his eyes glow.

Kawalsky and Colonel Jack O'Neill are teasing each other when Major General George Hammond is introducing P3-575 and P3A-577 as possible destinations for SG-1 and SG-2. When Goa'ulds are trying to reach Earth through the Stargate, Kawalsky only wishes to let them pass as they can give the fight they're looking for. But suddenly, Kawalsky has a terrible pain on his neck. He has already taken a fistfull of aspirin with no effect. O'Neill asks him to be checked in the infirmary.

In the infirmary, Doctor Nimziki is checking Kawalsky and asks for the headache. Kawalsky complains that it's getting worse. Then Nimziki notices a lump on Kawalsky's neck. He touches it and suddenly, a form moves directly to Kawalsky's neck. Kawalsky's eyes glow and he takes Nimziki by the throat and breaks his neck. As Captain Samantha Carter and Doctor Daniel Jackson are giving a course about the Dial Home Device, Jackson is surprised to see Kawalsky in the SGC Stargate room, standing on the ramp. Visibly confused, he has no idea what's going on when O'Neill asks him. In the infirmary, Doctor Warner checks Kawalsky and, because of the blackouts, says he will perform a MRI.

In the MRI room, Doctor Warner sees the MRI results; a Goa'uld is inside Kawalsky, wrapped around the spine near the brain. As Warner is saying that he's taking Kawalsky off active duty, Kawalsky's eyes glow and Warner has just time to hit the alarm button. He's reaching the control room, knocks down three technicians and starts entering a gate address on the dialing computer. Captain Carter comes in, tries to stop Kawalsky with no success, picks up a microphone and orders to close the blast doors. Then Kawalsky grabs Carter and asks for help with a distorded voice. Colonel O'Neill comes and sees the scene. He asks airmen not to shoot. Kawalsky takes Carter to an elevator to reach the surface. Carter pushes a button on the elevator but Kawalsky pull her to the wall, knocking her unconscious. When O'Neill finally successes to open the elevator's door, he finds Kawalsky (in a normal state) asking for help.

In the infirmary, Kawalsky is strapped to a rotating platform. He then learns that an infant Goa'uld is wrapped on his spine. Because it's not mature yet, it's causing Kawalsky's blackouts. Doctor Warner says to General Hammond that he has taken off all the pain medication to increase his altertness. To remove the symbiote is for Warner an extremely complex operation. Kawalsky only wants a thing; having this thing removed. But Teal'c asks to speak with the Goa'uld. With a great pain, the latter takes control and speaks. It just only wants to return back to Chulak with no further explanation. As he is about to untie himself, airmen are ready to shoot him, but Kawalsky regains control. General Hammond orders now to Doctor Warner to find a way to remove the symbiote.

Later, in the infirmary, Kawalsky is strapped to a regular bed and is talking with Colonel O'Neill. Kawalsky says that, if he doesn't make it, he wants to be cremated. O'Neill jokes with him when he asks for Kawalsky's stereo.

Finaly, Doctor Warner is ready to operate. In the operating room, Kawalsky asks to General Hammond a promise; he wants to wake up at him or not at all. One hour and half later, Doctor Warner removes the parasite from Kawalsky. The operation seems to be a success.

In the infirmary, Kawalsky slowly retreives health as he can move his fingers and toes. He asks Carter to bring him Teal'c to thank him for what he has done. When Teal'c is alone with him, Kawalsky's eyes glow again; the Goa'uld is still in him, only a dead husk was removed. He grabs Teal'c by the throat and suffocates him. Then he reaches the control room, breaks Master Sergeant Walter Harriman's arm and enters Chulak coordinates on the dialing computer. He activates the self-destruct sequence too, closing the blast doors. When Kawalsky gets into the Stargate room, he finds Teal'c standing up on the ramp. After mutual warning the two engage a fight where Teal'c then the Goa'uld put each other's head in the event horizon. O'Neill, having disabled the self destruct sequence with General Hammond, asks Teal'c to hold Kawalsky in the event horizon. Then he orders Harriman to shut down the Stargate. The wormhole disengages taking of a part of Kawalsky's head, killing instantly Kawalsky and the Goa'uld. When O'Neill gets to the ramp seeing Kawalsky's body, Teal'c says to him, "He was your friend". O'Neill replies flatly, "My friend died on the table."